Hi my movievaures and welcome back to my blog. Today it’s a special day, as I’m moving to London and starting a new life. But a passion, stay a passion and I’ll never stop writing about Movies and Tv shows! So stay tuned.

I know I’m a little bit late; Black Panther was released a couple of weeks ago. But here is the thing, nothing is better than waiting and be surprised by the quality and awesomeness of a movie that you don’t expect to be as good as it really is. And that is exactly what happened to me. I was there, eating my popcorn, telling myself that maybe I was going to have a good time looking at the Black Panther beating-up some bad guys. I was even a little bit afraid that the movie was going to be a stereotype of the black community. But then, I was totally wrong!

And here are the reasons why I believe, Black Panther is the best Super-hero movie of the last few years.

When I saw the first trailer I was kind of afraid we were going to be the spectators of a movie filled with lots of stereotypes about Africans. We all know that Wakanda is an imaginary country, but besides that, it’s placed in Africa and at first I thought we were only going to be seeing colorful costumes and people talking with an accent. I know it is always difficult not to place some stereotypes, as some of them can be part true, but there’s always a limit between reality and mockery. So far from truth I was (Yoda time)

It’s not like there’s no stereotypes at all, we can find some of them, but I think that this mostly reflects a certain resemblance that we can find in some African cultures, like the organization with tribes, the importance of a leader, the proximity with nature… This is not false (or I believe it is not) and it’s never done in a way to make fun of the Wakanda people. Tradition is respected, like when the heir of the throne needs to win a combat to have the crown, but mostly the people and their needs are respected. Wakanda is shown as a country full of resources, not compare to its neighbors, rich, technologically advanced and completely closed to the world. I think that it’s a big change in how African countries are represented in movies. Of course, here a fictional world, but I think it is a very interesting approach on how describe this new country introduced in the Marvel’s world.

Otherwise, I think the dangerous subjects such as colonization, slavery, and the African American’s living conditions in the USA were very well approached in the movie. Things are clarified, faults were attributed to those who did (and still do) such horrible things, but it’s not a witch hunt and all white people are not mistrusted or categorized. The fact that only the “bad guys” believe that revenge is a solution shows us that we will never have peace if we still reproduce the same mistakes again and again. Our world should not be black against white people, or women against men, or elders against young people. We should all be in the same team. Unfortunately it is not the case and Black Panther has the lucidity to tell us that it is not an easy path to get to that point.

I admit it. When the movie was released and I read all the comments about it. I was a bit annoyed by the debates about how the movie was only about black people or on the other hand, how the movie was going to change things for cultural minorities. As you know by now, I don’t like making my own opinions based on what other people say. But I was kind of afraid about Black Panther becoming this huge movie that is supposed to make a change in the business, because I thought it could deliver a bad message, like “black people are finally recognized, back down white dominants”. But as I said before, I was wrong.

Black Panther is definitively a symbol of inclusion, not only because it represents the black community, but because it does not excludes the other ones. Inclusion and integration is not a synonym of dominance or revenge and the directors and actors of the movie understood that really well. It is not necessary to produce a poetic and dark movie in order to talk about important subjects as peace between societies, brotherhood, respect, family… I even believe that in order to make things change it is important to integrate those kind of subjects in movies that are going to be seen by a lot of different people and more importantly by the youngest ones; they’re the future.

One of the other thing that I really appreciate about the movie is the fact that women are very well represented. They’re fearless, honest, loyal, and totally badass. They’re not sexualized, they’re not victimized and that’s also a change in this kind of movies. I know what you’re going to say: what about other marvel characters as Black Widow? I’m not saying there are no other female characters strong and combative, but seriously, here’s almost an entire army of incredible women ready to defend their country. As I said, inclusion is not only a matter of color or race, it’s also a matter of sex and minorities. I felt represented in this movie, and I’m a French white girl. The power of good symbolism.

I was totally amazed by the beautifulness of every combat scene. The music, the acrobatics, even the colors were a delightful for my eyes and ears. Something that I really appreciate with super heroes like the Black Panther is that, on the contrary of other heroes like Iron Man, Thor or the Hulk (even if I like them don’t get me wrong), he fights on a much more “human way”. Let me explain: of course he’s faster, stronger and flexible than a normal human being, but his powers are not like “god powers”. He needs to have a strategy when he is in combat, it’s not only like he could destroy everything surrounding him. There’s tactic and there’s elegance is hos moves. 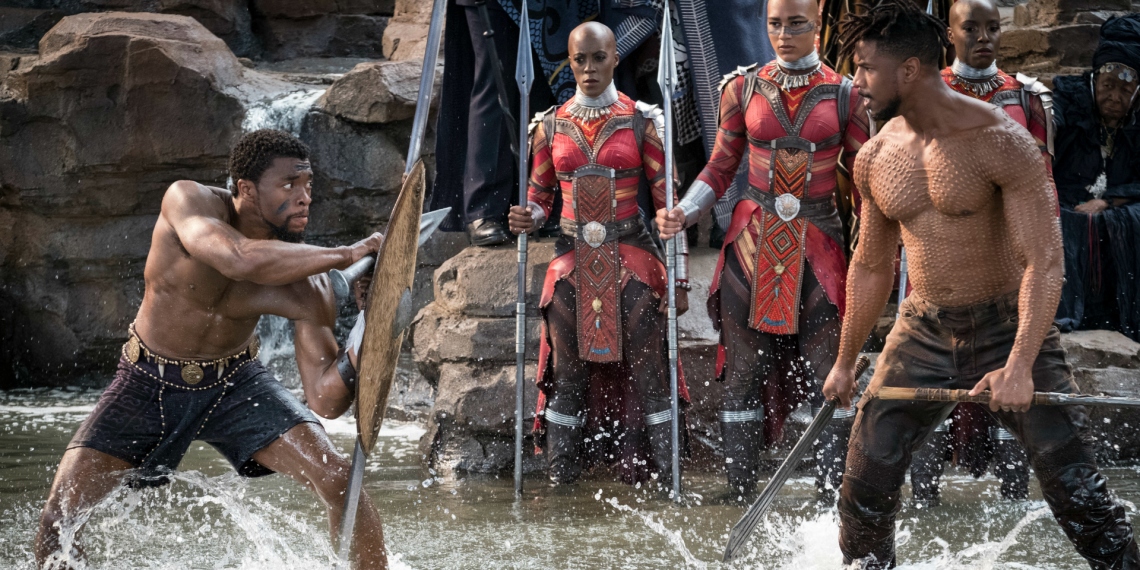 Moreover, there are other characters that also fight in the movie (a lot of women) and they don’t have superpowers. They’re fighters, trained since childhood, mostly invincible. I think that my favorite fights are those with the Black Panther, but also with the female soldiers of Wakanda. They’re so fearless and so patriotic, it’s just amazing to see them defend themselves and their country.

In short, it is a very good movie to watch, not only for its good action scenes, but also for its important symbolism. I know that some may be annoyed because they do not understand all the excitement around a Marvel movie. This film is not good because the majority of actors are black, but because it sends back the message that one, we will always be a better humanity.

Here is the end of my last and very long article on Black Panther. I hope you enjoyed it. In the meantime, feel free to read the other articles of my blog here. See you soon, for a new review in Les Movievaures. Lots of popcorns !